In a way, it was like launching the Office Repair from Control Panel > Add/Remove Programs, except it targeted just the application you launched it from.  If launched from Word, it would repair only Word.  If launched from Excel, it would detect and repair problems in Excel only.  If...well you get the idea.

Once launched, it brings up the Detect and Repair Wizard, which looks something like this: 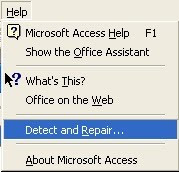 In Access 2007, they changed it to a more comprehensive utility called Microsoft Office Diagnostics, which is launched from Office Button > Access Options > Resources Tab > Diagnose. 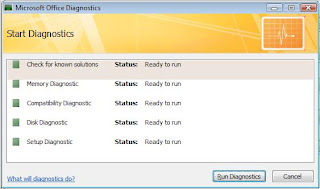 As far as I know, however, the option is not available in Access 2010, either from the menu system or the Ribbon.  You can, however launch it in code:


This will launch the original Detect and Repair.

If you want to add it to the Ribbon, you'd have to put the code in a function in a general module:
Function Detect_Repair()
Application.CommandBars.FindControl(ID:=3774).Execute
End Function

Create a macro that runs the function:

And lastly, add the macro to a custom group on the Ribbon.