In my last post, Select Queries Part 1: Simple Queries, I talked about the first two sections of a Select Query, the SELECT clause and the FROM clause. These allow you to display certain columns from designated tables. The next section is one of the most powerful features of a query: the WHERE clause.

The WHERE Clause is one of the most powerful features of a query. It allows you to restrict the rows returned based one or more criteria. These criteria are in the form of an expression, the general form of which is:

The field is a column in the base table(s) or a calculated column. It does not have to be in the Field List. The comparison operators are the standard math comparators: =, <, >, <=, >=, or <>; with some SQL specific ones added: IN/EXISTS, BETWEEN, LIKE, and IS NULL. The value portion can be either a hard coded value (like "hammer" or 25), or it can be another field or expression.

The WHERE clause follows the From Clause in a SQL Statement like so:

Examples of simple WHERE clauses:

WHERE ProductName="hammer"
(to show all hammers)

WHERE ProductName <> "hammer"
(to show all products EXCEPT hammers )

LIKE is used with character data only and uses the asterisk as a wildcard symbol:

IN allows you to test if a field matches one of a list of values.

IN can also contain another SQL statement. The SQL statement contained in the IN must have only one field in the Field List.

I'll talk more about this in a later post when I discuss subqueries.

BETWEEN allows you to test for a range of values:

IS NULL is a special comparator that tests whether or not a field is Null. The other comparison operators do not work with Null, so IS NULL is the only way to test for it.

WHERE ProductName IS NULL

Unfortunately, the Query Builder View of WHERE clauses (or Criteria as it's called in the QB) looks quite different than in the SQL View. In the QB, you do not need to repeat the field name with an OR or AND statement like you do in SQL. For instance, if I wanted to display both 10p nails and 8p nails, my WHERE clause would look like this:

Of course, this would also work:

You have to be careful when creating multiple criteria in the Query Builder because sometimes they don't say exactly what you think they do. It matters which lines in the Criteria that you put your expressions. You create ORs on separate lines, while you create ANDs on the same line.

So this:
WHERE ProductName="saw" OR Cost BETWEEN 5 AND 10

(Notice the criteria are on separate lines.)

WHERE ProductName="saw" AND Cost BETWEEN 5 AND 10

(Notice here the criteria are on the same line.)

It gets even more complicated with multiple ANDs and Ors. For instance, what does this statement mean?

You might think it means I want "saws and hammers with a cost between 5 and 10". However, it doesn't. There is an Order of Precedence to the logical operators as there are with arithmetic symbols. AND always takes precedence over OR. So what will really be returned is "ALL saws and only those hammers that cost between 5 and 10". The AND expression will be evaluated before the OR expression.

So how do I get what I want? The answer is parentheses. If I want something evaluated out of precedence (like my OR expression) I surround it with parentheses. So it would be this:

In the Query Builder, it would look like this: 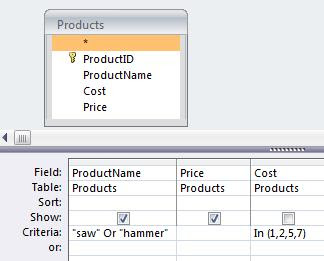 I will get the following SQL statement:

Because there is only one table in the query, the table name preceding every field is not necessary. However, it also puts in parentheses, which, while it makes the query technically correct, actually makes it harder to read. Many of these parentheses can be removed, but not all. Naturally, the parentheses that surround the IN list must remain and also the OR statement that we know we want to take precedence. The query can be cleaned to look like this:

Because of the possibility of error when creating complex WHERE clauses in the Query Builder, I usually create them in the SQL View where I know I can control the parentheses.

There is one more important Logical Operator, and that's the NOT operator. The NOT operator reverses an expression. It can be used with the LIKE, IN, and BETWEEN operators or entire multiple-expression WHERE clauses. It returns all rows EXCEPT those that would have been returned if you hadn't used the NOT.

It's important to remember that NOT also reverses both the comparison operators and the other logical operators, so you need to be really careful. For instance,

Next time, I'll look at sorting and groupin in: Select Queries Part 3: Sorting and Grouping (ORDER BY, GROUP BY).