What are the differences between Access SQL and T-SQL (SQL Server)?

Access SQL and SQL Server's T-SQL have more in common than differences. They share much the same structure, syntax, and many functions. And yet for all that, the differences can be frustrating. There are many times when an experienced Access user will know exactly how to do what they want in Access, but cannot figure out how to do the same thing in T-SQL.

I'll start by just listing the basics, but I'll spend some time over the next few months expanding on them. The following is certainly not exhaustive, but they are differences that cause most of the confusion when first trying to use T-SQL.

Both Access and SQL Server have the DISTINCT predicate which follows the SELECT, but T-SQL does not have DISTINCTROW.

Parameter queries as known in Access SQL cannot be converted directly to a Pass-through query. The most common way to simulate parameters is to build the Pass-Through query in VBA code and then execute it.

Great Features of T-SQL you should know about

Access does not allow comments in queries, but T-SQL DOES! This is a great feature of SQL Server. There are two methods of commenting:

Variables are another thing which Access does not have that T-SQL does. Variables provide another way to parameterize a T-SQL query.

As mentioned in the Functions list, T-SQL has a COUNT DISTINCT aggregate function, which Access lacks. You can read more about it here: COUNT DISTINCT in Access

There are, of course, many more differences between Access SQL and T-SQL. What I've concentrated on here, are those "gotchas" that crop up when trying to convert an Access query to a Pass-through query in T-SQL syntax. I'll discuss the details of these differences in future posts.

How to Use this tool:

When you first open the f_DataDICTIONARY_DisplayControl form, you will not see much until you choose a table to look at. 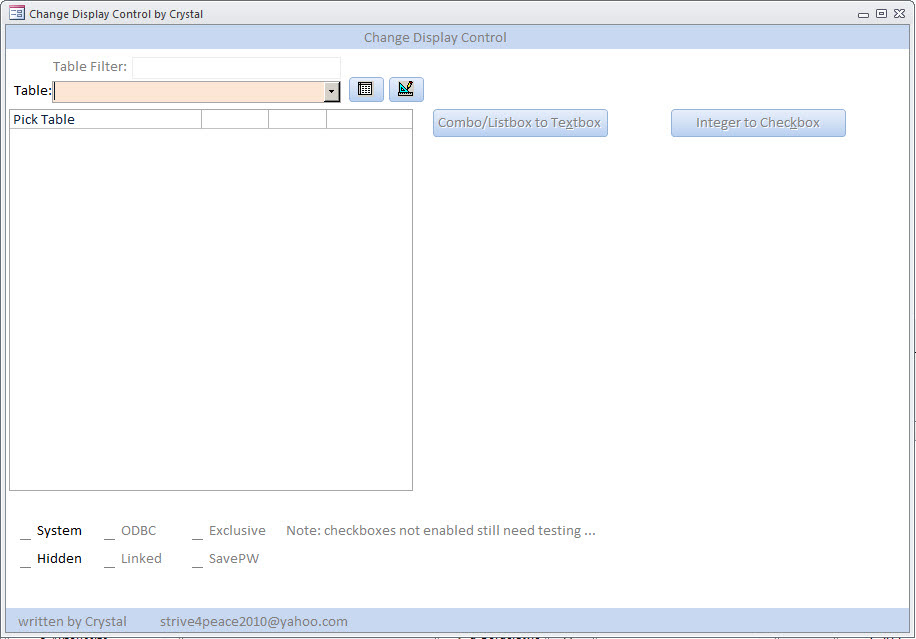 Posted by Roger Carlson at 3:05 PM No comments: