Last time, in Normalizing Repeated Columns: Multiple Columns (Part1) I talked about Normalizing data in repeated columns from a spreadsheet, like this: 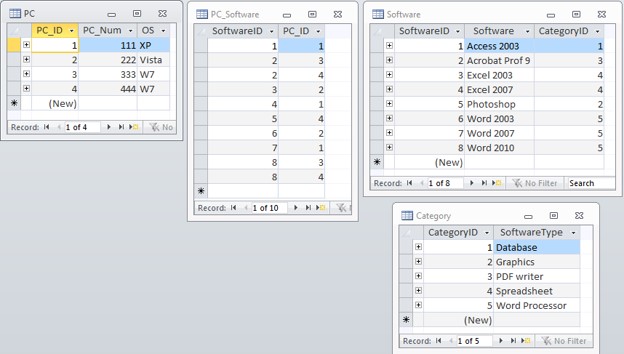 Using a One-Time process that creates the tables and relationships in addition to copying the data.

The process for normalizing repeated column data into Existing Tables is similar to the One-Time process. It does, however, require you to create the tables and relationships correctly ahead of time. Because I've just created them in the previous section, I'll simply delete the data and re-append it from the linked spreadsheet.

The two processes are very similar, but I'll be using Append queries rather than Make-Table queries.

Since I've already got a table, I'll use an Append query rather than the Make-Table query I used earlier: 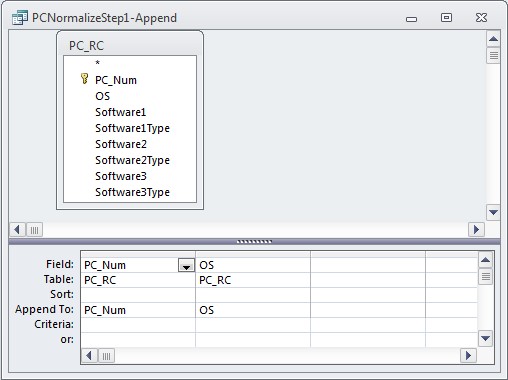 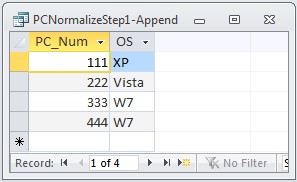 Since I already have an autonumber primary key defined on the table, I don't need to do anything further.

This step is exactly the same as Step 2 above. I'll use a Make-Table query to create a temporary table that will be used for creating the relationships later.

The result will be a table that looks like this: 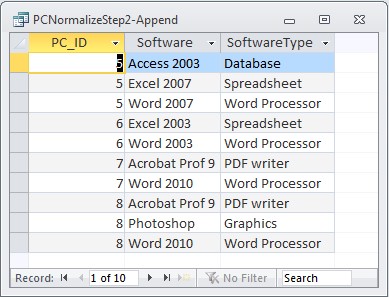 I need to create a query that removes the duplicate values. The DISTINCT predicate works well for that. As before, I'll use an Append write the data to my existing Software table:

With the resulting table: 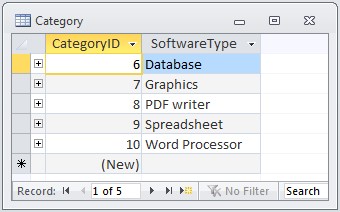 Again, this table already has an autonumber primary key, so I don't need to create one.

So now, I've got my two "One-Side" tables: PC and Software. Now I just need to fill the linking table.
I can do that with an Append Query and a simple join of Software and Software_Temp: 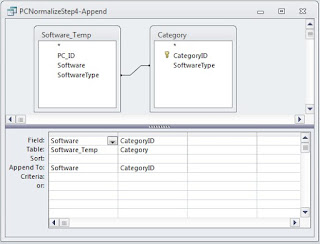 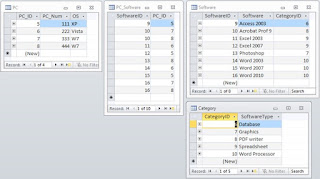 It is important to note that the order in which the data is moved is vital. Data must be written into the "one-side" tables (PC and Software) first, and then data can be moved into the "linking" tables (PC_Software).

Posted by Roger Carlson at 7:13 AM