How do I create a Running Sum Query?

SQL is a very powerful query language that is built into Microsoft Access. But one thing SQL does not do very well is refer to a previous row to calculate values. As a result, some things that are simple to do in a spreadsheet are difficult in a query. One of those is creating a running sum.
A running sum adds the value of a field in a record to the value of the same field in the previous record.
Running Sums are fairly easy in an Access Report, but more difficult in a query.  Difficult, but not impossible. This article will show how to create a running sum query.


Running Sum in a Report

Create a running sum in a report with an unbound textbox in the Detail section. This time, however, in the control source, put the name of the field you want the running sum on. And just like the number query, set the Running Sum property to Over All.
A running sum adds the value of a field in a record to the value of the same field in the previous record. 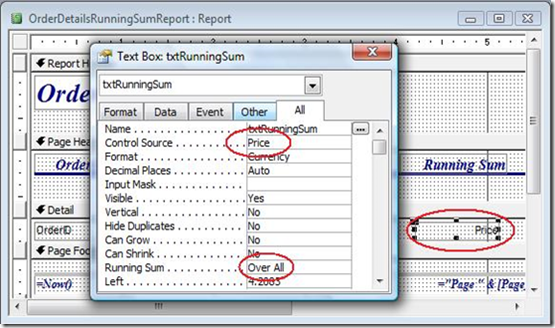 Figure 1: Shows the property dialog box for a text box on a report that will create a running sum.

But suppose I don't want to do it in a report. Suppose I want to do it directly in a query. There are two different ways to accomplish this. The first uses the Domain Aggregate Function DCount and the second uses a Correlated Subquery.
Both of these methods require a unique column in the table to create the sequence on. This could be the Primary Key field or any field that has a Unique Index. In the following example, the Customers table has two such columns, CustID (Customer ID), which is the primary key, and CustName (Customer Name), which has a unique index.
I’ve already discussed the Domain Function method in a previous article here: Domain Function Example: Running Sum with DSum, so in this article, I’ll address the Sub Query method.

There are two common types of running sums. The first is a running sum over the entire resultset. see Figure 2 for RunningSumOverAll

Figure 2 illustrates the running sum of the Price field in an Order Details table.
The second is a running sum over a group. See Figure 3 RunningSumOverGroup

Figure 3 shows a running sum over a group.
In this case, the group is the OrderID field, and you'll see that the query starts the summing over as the group number value changes. 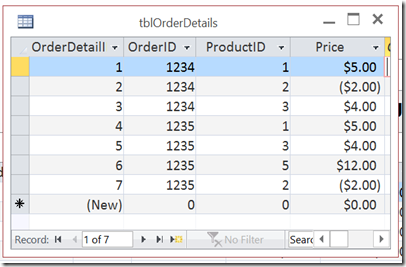 The table is sorted on OrderDetailID, so the first thing is to create a placeholder in the query: 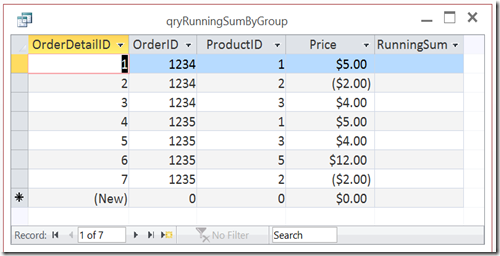 Now I just need to replace the NULL with the running sum value.  But how? In Excel, I’d reference the cell to the left (Price) and add it to the cell above (RunningSum).  So cell B5 would have a formula of =A5+B4. 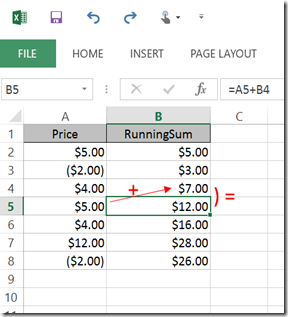 Figure 5: Method that WILL NOT work in Access.
But tempting as this is, Access can’t reference individual cells.  I need a different method.
Since addition is cumulative, I can sum A1 through A4, in other words, B4 = SUM(A1:A4) 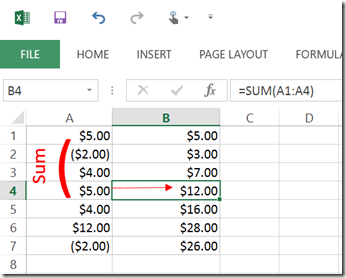 Figure 6:This method CAN be translated to Access
This method I can use.


Running Sum Over All

I can find the value of any individual record (say OrderDetailID=4) with a query like this: 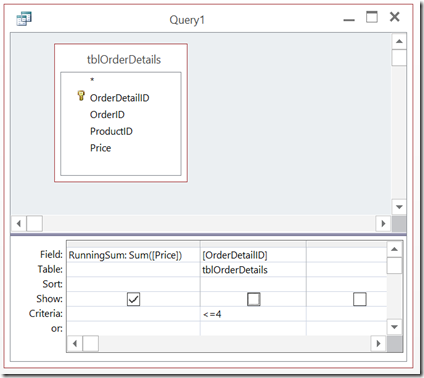 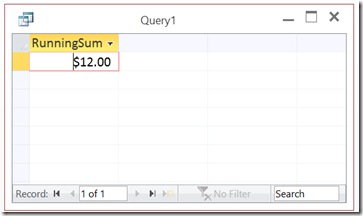 So I need to link the subquery with a particular record in the main query.

The last piece is to reference the OrderDetailID in the main query rather than the hard-coded 4.

Figure 10: Results of the completed Running Sum Over All query.

Here's how it works.

Then it processes the second record. The OrderDetailID of that record is 2, and the subquery sees that there are only 2 records which have an OrderDetailID whose value is less than or equal to 2. So it sums those records ie. $5.00 + (-$2.00) = $3.00.

Figure 11: Result of the Running Sum query over a group. Notice how the running sum resets when the OrderID changes from 1234 to 1235.
You can find a sample called

which illustrates both Over All and Over Group as well as the corresponding DSum Method (domain aggregate function).

Posted by Roger Carlson at 9:37 PM