What is Normalization: Part IV

In What Is Normalization, Part III, I discussed how to create a relationship to join our normalized tables back together so that no information was lost in the normalization process.

There are three basic kinds of relationships: One-to-One, One-to-Many, and Many-to-Many.

To implement a one-to-one relationship, you must have a primary key in both databases, which stores the same information, SS# for example. So continuing with our employee database example, suppose we had a ContactInfo table which stored Address, City, State, Zip, and Phone.

In this simplified example, we'll assume that people have a single address and phone. The primary key for this table would also be SS# since each record in the ContactInfo table represents the contact information for a single employee.

To create the one-to-one relationship, I would click and drag the primary key from Employee (SS#) to the primary key of ContactInfo (also SS#). Although the fields are named the same in this example, they do not have to be, however, they MUST represent the same information. In the Relationship Window, it would look like Figure 1. 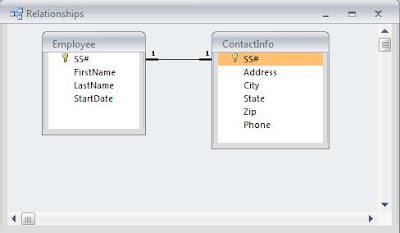 Notice there is a 1 on each end of the relationship.

In relational databases, 1:1 relationships have limited utility. In most cases, the data elements from both tables can be combined into a single table.

This type of relationship is also known as the parent/child relationship for good reason. If we consider a biological parents only, we can say each mother can have one or more children and each child can have one and only one mother. 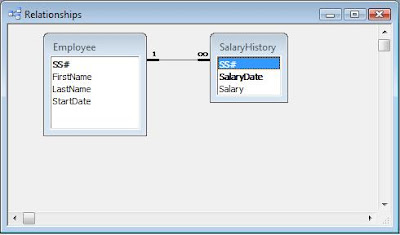 In real life, M:M relationships are extremely common. You'll notice that in both the other illustrations, I had to qualify the definition of both a marriage and parent/child. That's because real world definitions are messy. In some places in the world, a man can have multiple wives and a woman, multiple husbands. Sometimes simultaneously. Children can have more than one parent. In the real world, these relationships many-to-many.

In What Is Normalization: Part V, I'll show how.

Posted by Roger Carlson at 7:00 PM