For instance, suppose I wanted to display the difference in days between orders in the table below:

The problem is that SQL does not have positional notation like Excel does. There's no way to simply point to the record above the one you're on. The only way to do it is to somehow identify the previous record in terms of a Where condition. Since this Where condition must be evaluated for each line, I can do this with a domain aggregate functions (DMax & DLookup).

For this method to work, I must have a unique record ID. The Autonumber field is ideal for this. It doesn't matter if there are gaps in the sequence, but I have to sort on this field, so there cannot be duplicates and they must be in the order I need displayed. In the above sample, OrderDetailsID fits the bill.

The technique is similar to creating a Numbered Query or a Running Sum in a query, but instead of just counting or summing all the records above the current record, I have to find just the previous record. This adds an additional complication, which requires an additional domain function.

Difference Between - Over All
Domain Aggregate functions are an Access-only method to return statistical information about a specific set of records, whether from a table or query. They have three arguments: 1) an expression that identifies a field, 2) a string expression that identifies a domain (that is, the table or query), and 3) a Criteria, which is essentially an SQL Where clause without the word WHERE.

Here are the steps:
The full query, looks like this:

The Order By clause in the query is important. This will sort the query on the OrderDetailID field. I'll need to have that order to use the criteria argument in the DMax.

It is not necessary that the Order By field is an unbroken sequence. As long as that field has unique values and is sorted, it will work. 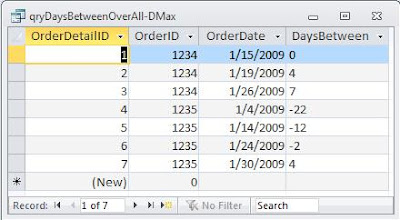 Figure 2: Shows the time difference in days between subsequent records. 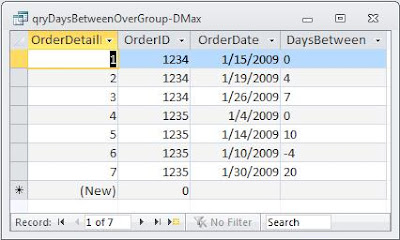 Figure 3: As the OrderID changes, the DaysBetween resets to zero.

to the "Where" condition of the DMax function. This sets the value of the first record of each group to zero.

As I said, these can also be done with a correlated subquery, which I may discuss at a later date. However, you can find both methods on my website in this sample: DaysBetween.mdb
Posted by Roger Carlson at 6:46 AM