How do I run a macro or code when the database starts?

Access has a special macro called Autoexec, which automatically executes when the database opens. You can use this macro to do practically anything: open one or more forms in hidden mode, relink your tables, pop up a tickler list, or whatever startup functions your application requires.

At its simplest, simply create a new macro, choose the Actions and associated arguments required, and save it under the name Autoexec. The next time you open your application, this macro will execute.

So a much more elegant solution would be to create an Autoexec macro that does what you want it to do. After you test it, convert it to a VBA function.

The conversion will create a new function called Autoexec() in a general module. Next delete all the actions from your existing Autoexec macro and replace it with the RunCode action, with Autoexec() as the function name. Like this: 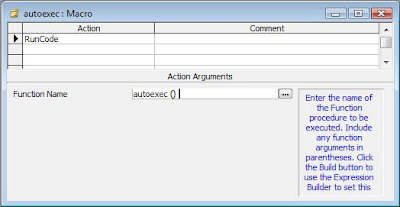 Posted by Roger Carlson at 1:33 PM