How Do I Decompile a Database?

In order for any program code to be run by a computer, it must be converted to machine-readable code. This code is called Object Code. The text version of this program that you and I can read is called Source Code.

In Access, the process of producing Object Code from Source Code is called "compilation". Whenever code is run for the first time in Access, the code is first compiled. (You can also compile it yourself by pushing the compile button). The only place you can make changes to code is in the Source Code, which must again be compiled into Object Code.

Occasionally, code can be deleted from the Source Code, but for some reason is never removed from the Object Code. This code is never again seen on the screen as text, but is still sitting there somewhere in the database file. This can, at times, interfere with the normal operation of the program.

To remove these stray bits of code, you can "Decompile" your database and then re-compile it. This process removes all of the compiled Object Code, then when you re-compile it, you only get Object Code that reflects the current Source Code.

I use decompile quite frequently, so instead of typing the command line into the Run box, I've created a shortcut on my desktop. There are several ways to create a shortcut, the easiest is to use the Shortcut Wizard.

Right-click anywhere on your desktop and select New > Shortcut. The wizard will give you a dialog box allowing you to browse to the file you want. It should be the same as above in Step 2. Once you've browsed there, add the "/decompile" switch to the end as shown below. Be sure to separate the decompile switch from the file path with a space. It will look as follows: 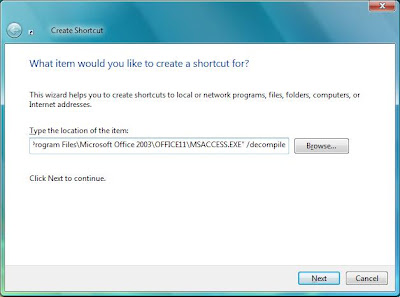 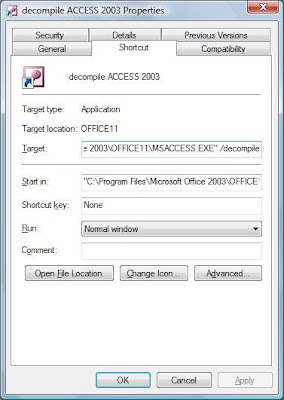 Now when I want to decompile a database, I just click the shortcut and start with Step 3 above.

Posted by Roger Carlson at 6:05 AM

For some technical information about decompiling visit Decompile or how to reduce Microsoft Access MDB/MDE size and decrease start-up times http://www.granite.ab.ca/access/decompile.htm

Thangs for the blog! This has saved me for sure. Once I got an error saying that the Function in the AutoExec could not be found. After decompiling and recompiling the issue went away...thanks again!!

This fixed my database. Thanks for a new trick!

Bless you! I had no idea what was wrong. That fixed my database :-)I kept getting a return without gosub error on a function I had not changed and was working fine before

Thank you so much for these directions! I kept getting a return without gosub error on a module that previously was not giving me problems. This fixed it.